A frequent refrain in media, in social networking memes and posts, in political rhetoric and in classrooms is that the United States is the greatest nation on Earth. It has also been called a grand experiment and a melting pot.

It is exactly that peculiar nature of our country—that it was founded by immigrants and sought to welcome and include yet more immigrants of diverse tribes—that makes it unique. Comedian Jon Stewart commented in a recent interview that, in setting up this ”one nation” with (the ideal of) ”liberty and justice for all”, we were going against millions of years of human evolution. We were setting up a set of federated units that flew in the face of millennia of tribalism. It should be no surprise, he said, that it’s hard.

I’d disagree with Mr. Stewart in one particular—as a Baha’i, I believe that our evolution has been drawing us ever closer to a recognition of our unity through overcoming our reflexive tribalism. Reversing the process of integration is to buck evolution—to de-evolve.

If we are to continue to progress as a nation that is part of a larger global network, we must solve the problem of tribalism. We have come too far in our development as a species to disentangle ourselves from each others’ lives genetically, socially, administratively, emotionally or spiritually. Indeed, it makes no sense to do so, for we came from one source, diverged, and now live in a world in which segregation is increasingly impossible. Attempts to artificially impose such segregation will, instead, bring about disintegration.

The National Spiritual Assembly of the Baha’is of the United States addresses the issue this way:

”The persistent neglect by the governing bodies and the masses of the American people of the ravages of racism jeopardizes both the internal order and the national security of the country.

”From the day it was born the United States embraced a set of contradictory values. The founding fathers proclaimed their devotion to the highest principles of equality and justice yet enshrined slavery in the Constitution. Slavery poisoned the mind and heart of the nation and would not be abolished without a bloody civil war that nearly destroyed the young republic. The evil consequences of slavery are still visible in this land. They continue to affect the behavior of both Black and White Americans and prevent the healing of old wounds.

”Healing the wounds and building a society in which people of diverse backgrounds live as members of one family are the most pressing issues confronting America today. Her peace, her prosperity, and even her standing in the international community depend to a great extent on the resolution of this issue.

”That the virulence of the race issue in America attracts the attention of the entire world should spur this country to an unprecedented effort to eliminate every vestige of prejudice and discrimination from her midst. America’s example could not fail to have a profound influence on world society, nor could it fail to assist the establishment of universal peace. ’For the accomplishment of unity between the colored and white,” the Bahá’í writings proclaim, “will be a cause of the world’s peace.’” — The Vision of Race Unity 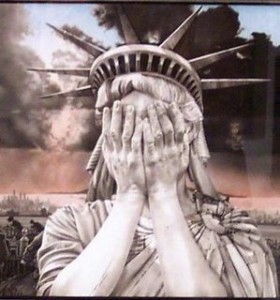 It is in this ability to influence the progress of the entire world that our potential greatness—and our potential shame—lie. We can influence the world for ill or good. We can offer an example of separation, suspicion, open hatred and disintegration, or we can demonstrate our ability to lead humanity into the next phase of its maturity.

The Guardian of the Faith, Shoghi Effendi, writing in the 1930’s about the potential of America, said that American Baha’is should not ”imagine for a moment that for some mysterious purpose or by any reason of inherent excellence or special merit Bahá’u’lláh has chosen to confer upon their country and people so great and lasting a distinction. It is precisely by reason of the patent evils which, notwithstanding its other admittedly great characteristics and achievements, an excessive and binding materialism has unfortunately engendered within it” that America was chosen to lead the way toward global unity. It is precisely because the United States is ”immersed in a sea of materialism, a prey to one of the most virulent and long-standing forms of racial prejudice, and notorious for its political corruption, lawlessness and laxity in moral standards”, that this nation has the mandate to show the rest of world that human solidarity and unity is not only possible, but is an inevitable stage in our evolution as a species.

In other words, it is because the challenge is so Herculean and so fraught that by meeting it, we can exercise unique influence on other nations and ”be a cause of the world’s peace.”